Skip to content
According to the Guinness Book of World Records, up to now, Ed Currie’s Carolina Reaper variety is the spiciest on Earth.
On the Scoville scale of spicy, the group of Carolina Reaper chili peppers had an average of 1,569,300 units, of which some were 2.2 million. Meanwhile, the tear strength of the specialized tear gas gun is 2 million Scoville units.
The Carolina Reaper variety was spicier than a pepper spray 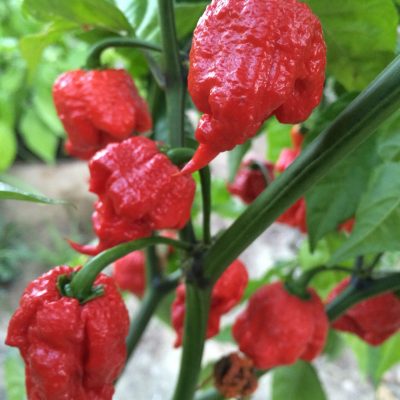 The “danger” level of the Carolina Reaper has been studied by a group of students at Winthrop University in the curriculum.
Cliff Calloway, a professor at Winthrop University and a research guide, said the determination of the spicy concentration of chili peppers was based on the analysis of a chemical compound called capsaicinoids in this natural spice. The higher the concentration of this compound, the stronger the spicy chili is.
The scientists calculated the spiciness by separating the capsaicinoids from the peppers, then using a solution chromatography to check the exact mass of the compound. The results are then converted to the Scoville scale based on a given formula.
Ed Currie, the head of the PuckerButt Pepper company, has spent most of his life searching and breeding the world’s most spicy peppers.
Currie’s new world record has shocked the world of chili farmers, creating a new kick in the fight to create the world’s most spicy peppers. Hot peppers are a commodity with high consumption in the US.